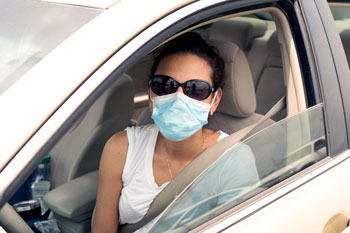 With her window cracked open midway, Maria, a mother of two boys, joined hundreds of other families waiting for one of our mass distributions to begin. She had known about the food distributions, but she never imagined she would be among the vehicles waiting in the parking lot of Del Valle High School.
“Like everybody else, everything was going good until it wasn’t, and I’ve been unemployed,” Maria said. “We were both working. The kids were getting meals at school, so we were able to maintain ourselves and were not in this situation.”
Both Maria and her husband had steady jobs and had never received help from the Food Bank. When the pandemic began, Maria and her husband lost their jobs. The family of four went from having two incomes to relying on their savings to get by.
As their savings dwindled, an unexpected accident put them over the edge. Her youngest son had a bike accident that sent him to the doctor. When Maria lost her job, she also lost her health insurance and the family had to pay out of pocket for the medical expenses.
“We were paying that medical bill, so our resources were already a little bit thin. But we had food, so we didn’t have to go out and panic. But now we’re getting to the bare bottoms and it’s a scary feeling…when you have to provide three meals, it goes pretty quick,” she said.
With an 11 and 15-year old at home, food doesn’t last long, especially when the kids are at home the whole day. Even after trying to cut their expenses by watching their food consumption, cutting their cable expense and any other unnecessary expenses, Maria realized they needed help.
“At first we were like, we don’t need it, let’s have the people that really need it go out there and do the lines and do everything, we don’t need it. But now, it just hit me last time, ok we need it now,” Maria said.
At the mass distribution, Maria joined hundreds of other families that have also been affected by COVID-19.
Due to the pandemic, there has been a 220 percent increase in families like Maria’s seeking food assistance for the first time. To help meet the growing demand, the Food Bank is distributing a record amount of food—more than 22 million pounds of food since March—through our network of nearly 300 pantry partners and food distributions.
As families like Maria’s continue to struggle to put on the table, we need your help to keep our shelves stocked to ensure families have access to healthy meals during this challenging time.