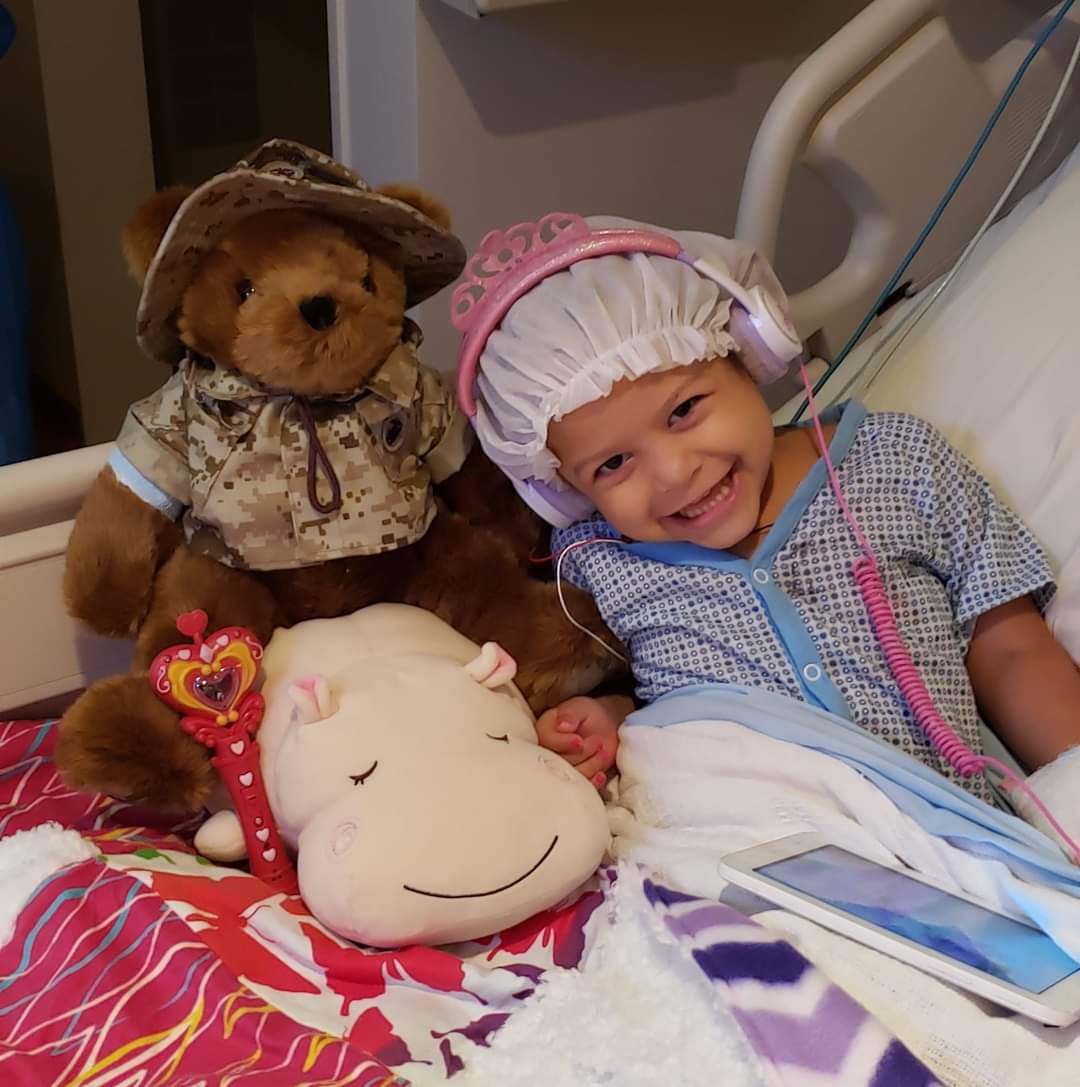 It was August 24th, 2019 and my daughter Rihley had woke up again with yet another fever. This one was 104.7 and she was crying in pain. For over 2 months now we had been in and out of the doctor’s office and the emergency room in our limited base hospital in Okinawa Japan. We kept hearing its was a virus it will be okay; she will get better. Except she didn’t. And on this morning, I called her doctor on the neighboring base and expressed my serious concerns. She hadn’t eaten but a few bites a week in a month, pain all day in her legs, tired all the time and constant fevers. We were directed again to the only base for Military on island and had a full blood panel done and returned home. Within 30 minutes I was on the phone being directed to return to the ER immediately as my daughter’s blood numbers were in critical ranges. I asked the question that for some reason had been plaguing my mind, is this Leukemia? I had seen it before on TV I had researched all her symptoms for months now, I just knew. But nothing prepared me to hear “we believe that very well is the case as we saw abnormal cells on her smear. Please get to the hospital ASAP and there will be a team waiting to discuss things with you". She was outside with her brother and sister and friends catching bugs with her dad like kids do. With tears in my eyes and shaking with fear I had to tell my husband what I was told just now, and we had to gather some things as fast as we could and leave for the hospital. Neighbors helped me through the tears, provided me with snacks from their home, gave hugs of encouragement, pet my dog goodbye, and left, not knowing I would never see any of them again. We had just got stationed in Okinawa 5 months earlier and the overseas move combined with I had found out I was pregnant and was then 17 weeks and paying for pet travel left us in a bit of a financial bind, as happens with many families. When we got to the hospital it was a whirlwind of doctors and news. I felt scared and sad and confused, often separated from my husband and kids as her immune system was sitting at a virtual zero, she was limited on visitors. We were told they couldn’t help us here and we would be leaving on the next medical flight out to Hawaii 4 days away. She received several blood, platelet, and immune infusions over several days. My daughter and I had to leave alone leaving my other 2 children and husband behind to try and rush all of our life together in 3 days time when they would then follow. We lost our vehicle, lost our pets, and lost our home. We lost our sense of normalcy and my son missed his first days of school. We had little to no money and having to move across the world again for the second time in a year without so much as a week’s notice was exhausting mentally, physically, emotionally, and of course financially. When we made it Tripler Army Medical Center we met with the social worker who told us of HCCF when we expressed our concerns about food, gas and beds for my family as we now had none because we were using military furniture that had to be returned. Within a very short amount of time we were accepted into the program and the timely reimbursement for gas (an essential) took a HUGE weight off our shoulders. We no longer had to worry about feeding my family or affording the back and forth. We put beds on layaway at a furniture store and they provided them a check. After living on a hospital chair and air mattress and very pregnant, the relief brought me to tears. Without HCCF over the last year we wouldn’t have been able to stay afloat and I can’t express my gratitude enough. So, thank you HCCF for all you do for families like mine who would be lost otherwise. Financial stress was a large burden on top of having to handle my family’s hardships and you all made that go away.