Your Gift to Children's of Alabama 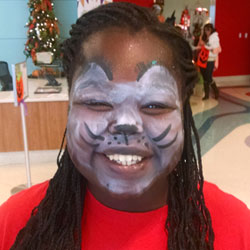 Sometimes, a doctor is just a doctor. But oftentimes, they are so much more. For Ayannah Turner and her family, the doctors and staff at Children’s of Alabama are much more like family. “So many people at Children’s helped shape our life,” said Sheila Barnes, Ayannah’s mother. “Everyone there, from the cafeteria workers to the lab techs and those in environmental services, has become a part of us.”

That bond started when Ayannah was about 10 months old. Sheila felt a lump in Ayannah’s side when giving her a bath. After going to the pediatrician and getting an ultrasound, they were referred to Children’s hematology-oncology clinic. “We didn’t know much after that ultrasound, just that she may possibly have cancer,” Sheila said. “I don’t think I remember much after hearing that.”

After some testing, hematologists-oncologists Eric Gratias, M.D., and Thomas Howard, M.D., informed Sheila that Ayannah had stage IV Wilms tumor, or nephroblastoma, a type of cancer that starts in the kidneys. At the time of Ayannah’s diagnosis, the cancer had spread to her lungs. Devastated by the news, Sheila was comforted by the care she received from the doctors. “When she was first diagnosed, I told Dr. Gratias that it was so overwhelming,” she said. “He came back with a leather binder that had her lab results, copies of scans and printouts of all of her medications. He told me to look at it, read it and get familiar with it. To write out my questions and let him know if there was anything I didn’t understand. He told me that I would know everything he knew. It made me feel like I was truly a part of her care.”

The plan of care doctors put together for Ayannah involved removing the affected kidney and six months of chemotherapy. She struggled after the kidney was removed, suffering an intussusception (a serious medical condition in which part of the intestine folds into an adjacent part of the intestine) and going into shock. “We knew that she had nephroblastomatosis in her remaining kidney and they were keeping an eye on it,” Sheila said. “The hopes were that it would remain stable. But a year later, it began growing. Her cancer had come back.”

The cancer’s return required the removal of Ayannah’s other kidney. She began dialysis while also doing extensive chemotherapy and radiation. During that time, Sheila and Ayannah’s siblings, sister Laila and brother Caleb, moved from their hometown of Union Springs, Alabama, to the Ronald McDonald House, where they lived for a year. “Children’s became our home away from home,” Sheila said. “All of my children grew up in this hospital.”

Despite the setbacks and long cancer battle, Ayannah’s smile never went away. “Her smile stayed as bright and warm as ever,” Sheila says. “She always smiles so big because, according to her, there is so much to smile about.”

Ayannah soon had something really special to smile about – the cancer was eliminated. She was able to remain cancer free for three years and get a kidney transplant. Since then, Ayannah has been doing great. Now 16 years old, she has moved on to a normal teenage life. She loves to play with her dog, Rascal, and she’s a big fan of Batman. But the biggest heroes in her life are still those at Children’s who became her second family. “Cindy Richards, Kari Pietsch and Lori Traywick mean so much to Ayannah,” Sheila said. “Cindy and Kari were like her second moms. And Dr. Daniel Feig is and has been truly a blessing to us. We are extremely grateful to have him. There are so many people at Children’s that played a part in helping us get to where we are now.”

Your support of Children's of Alabama helps us to provide the best possible care for children like Ayannah, and many others who rely on Children's. On their behalf, we thank you for helping make our mission possible every day.